The Herb Society of America defines a herb as “any plant that may be used for pleasure, fragrance or physic.”
Education removes many of the myths surrrounding cannabis (also known as marijuana) and promotion of it’s healing properties are becoming widespread and mainstream at an unprecedented rate.

The truth is:
1) Cannabis has been used as medicine for 4,700 years in many cultures (first recorded use: China 2737 B.C.)
2) There has never been a single death attributed to cannabis.

It is one of the oldest and safest medicines ever used. Plain and simple. The reason it is illegal is politically motivated and has nothing to do with its safety.(1) People realize the laws are unrealistic which is why 92 % of Canadians(2) support legal intergration of this herb into society.
END_OF_DOCUMENT_TOKEN_TO_BE_REPLACED

The public has been invited to respond to the Marihuana Medical Access Regulations (MMAR) published in the Canada Gazette, Part I, on April 7, 2001.

The government feels the MMAR is an appropriate and efficient response to address concerns raised in the Parker decision about the process currently used under section 56 of the CDSA by attempting to meet the following criteria :

1) meet the mandatory requirements of all international drug control Conventions, to the extent possible, in consideration of the Canadian Charter of Rights and Freedoms;

3) be clear and easy to implement, administer and enforce;

4) not unduly restrict the availability of marihuana to patients who may receive health benefits from its use; and

Back of the new $50 Canadian banknote

Emily’s Paradox was written and published on-line due to the frustration with mostly finding one-sided accounts available on the internet about her – the sanctioned, sanitized hero version.

With the minting of the Famous Five on the new Canadian $50 bill that just went into circulation November, 2004, discussion was swirling around the media once again about her legacy without much fanfare, though public acknowledgement of her less virtuous traits seems more widely known, and reinforce of some of the concerns expressed here.

END_OF_DOCUMENT_TOKEN_TO_BE_REPLACED 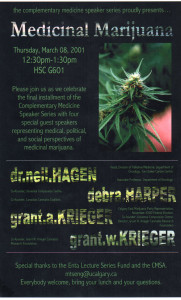 Indeed, we are in a new century, a new age, and the face of traditional Western medicine is slowly changing. The aging boomer population are looking for choices that suit their desire for safer, natural remedies to treat their ailments. Open-mindedness about complementary medicines will benefit the medical profession and patients alike, and it is very encouraging to see you here today to as we discuss this particularly controversial medicine known as cannabis or marijuana.
END_OF_DOCUMENT_TOKEN_TO_BE_REPLACED

On February 4-5, 2008 in Vancouver, BC, the second of two “Beyond 2008: North America Regional Consultations” took place in preparation for a 4th International NGO Forum on UN Drug Conventions. It was held at the Morris J. Wosk Centre for Dialogue, http://www.sfu.ca/dialog/, a venue extremely conducive to this type of event with it’s circular seating arrangement and clear audio system.

I represented the Canadian Cannabis Coalition – an umbrella group founded in 1999 that now has over a 130 national cannabis advocacy organizations and stakeholders along with some international affiliates, including 16 other attendees.

The Forum had an unwavering agenda to highlight achievements; review the practice and collaboration of NGOs, governments and UN agencies; and to adopt a series of high order principles to serve as a guide for future deliberations on drug policy matters. The slogan, “A Drug Free World – We can do it!” adopted as the 1998 UNGASS motto with a target date of 2008 was noticeably absent and replaced with ‘the achievement of “significant and measurable results.”

Participants represented NGO’s with a diverse range of interests in the health, treatment, prevention, criminal justice, human rights, alternative development, prohibitionist and consumer sectors, and spoke with passion and eloquence about their concerns.

What I found so unique about this particular dialogue was for the first time (at least for me), instead of the usual preaching to the choir, there were several front-line U.S. and Canadian civilian drug warriors sitting in the same room.

This gave the “legalizers” faces, voices and a strong message their foes had to listen to in a respectful manner. The “drug warriors” also had faces and voices – Kelly Corcoran of Drug Free America, an organization which would be laughed out of existence in Canada, along with former Senior Speech Writer and Spokesman for Office of National Drug Control Policy Kevin Sabet of SUNDIAL (Supporting United Nations Drug Initiatives and Legislation).

They heard Dale Gieringer of California NORML express dissatisfaction with having to travel to another country just to have his voice heard because the conference which took place in Florida was only open to those who advocate prohibition.

Someone else asked if forums held on racism were only attended by whites, or women’s issues attended only by men – and if not, where were the voices of those affected by this issue included? In Vancouver, the voices of drug users were heard along with those who champion for and against them.

A representative from one of the levels of the UN was observing and participating when asked, whereas I think he had the option of just reading the report. He heard our concerns, and also communicated a very clear message to us – the people who attend the UN meetings are government representatives from our countries, and those are the voices the UN hears. If we want those voices to sing a different tune, then our work is to change the representatives to ones who speak our language.

There was discussion about NGO’s gaining Special Consultative Status with the Economic and Social Council of the United Nations like Drug Free America Foundation has, but Jack Cole of Law Enforcement Against Prohibition (LEAP) mentioned his NGO made a request three years ago and are still waiting for a reply.
There was so much to absorb – and unless I missed something, it seemed to end abruptly without notifying us of a cut off for speakers (like they did during the breaks), so I never made a couple of quick points not mentioned yet, but will be included in a written report which participants can submit for a short period afterwards.

The next step will be to combine all the reports from these regional consultations for a final meeting in Vienna in July 2008: “Beyond 2008 – A Global Forum on the 1998-2008 Review of the United Nations General Assembly Special Session (UNGASS) on Illicit Drugs”. I understand they are hoping to have 300 delegates from North America in attendance, so fund-raising is a big concern.

There were so many good points made, and so many quality speakers, so be watching for other reports that have or will be posted. An official report will be released on the UN NGO website, http://www.vngoc.org/ along with the reports from the other regional consultations.

DrugSense hosts a section for material related to the United Nations Conventions so participants or other interested parties can contribute and share resources and material at:
http://drugsense.org/downloads/un/

On the evening of the first night, the mayor of Vancouver, Sam Sullivan, hosted a reception for all participants at the Ocean View Suites in the Pan Pacific Hotel at Canada Place which provided an excellent way to network along with delicious food and beverages.

Many thanks to local factivists [sic] Rielle Capler, David Malmo- Levine, Kirk Tousaw and Michelle Rainey who hosted events and assisted in many ways to make participants comfortable and the stay enjoyable. There were great and random acts of kindness going on everywhere.

It was exciting to meet so many kindred spirits from eastern Canada and the U.S. who live so far away and whom I can never cross the border to see! I look forward to meeting and hearing from you all again soon.